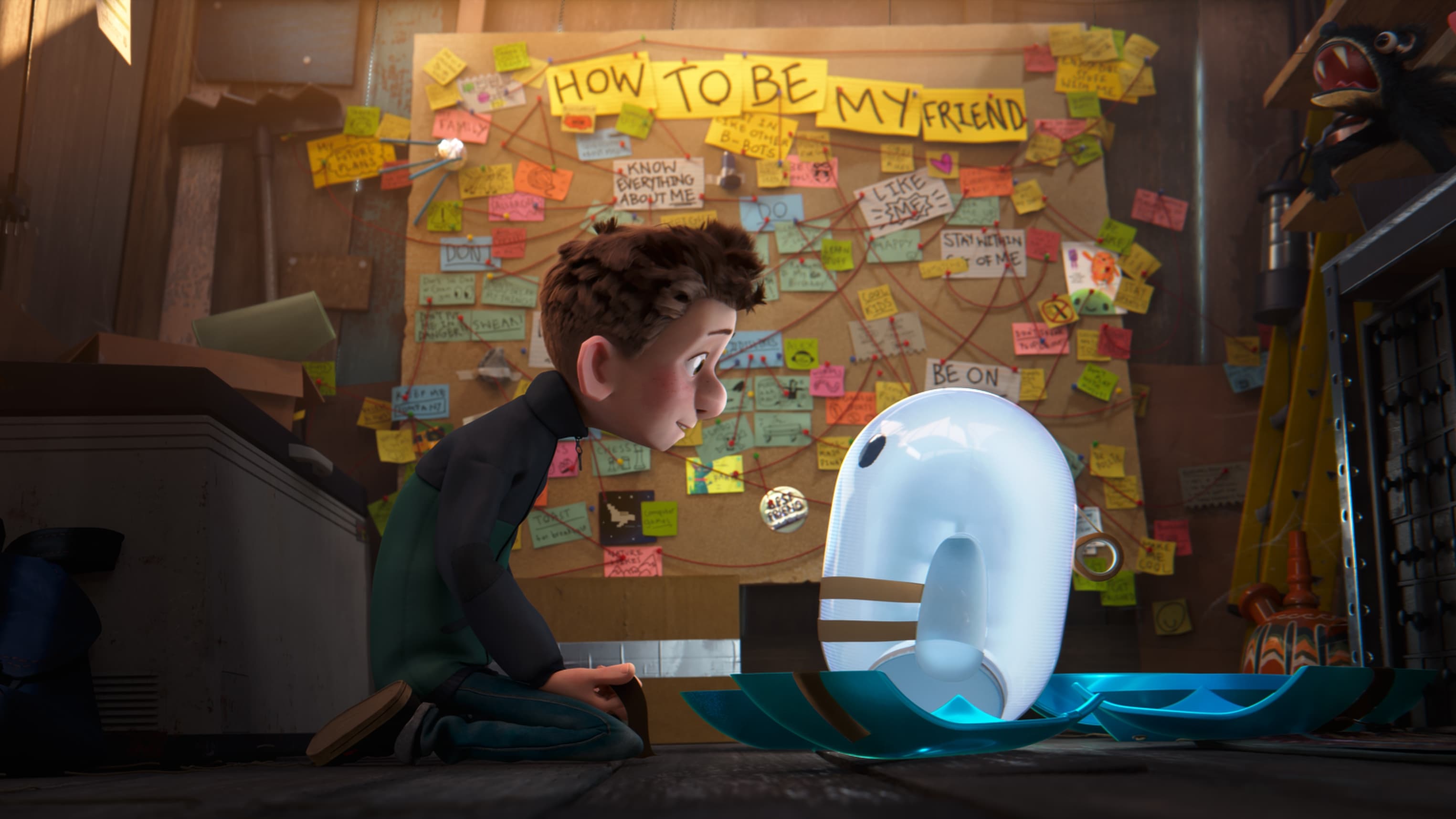 Synopsis: Barney is a middle school student with a social disability. Ron, his brand new device for walking, communicating, and digitally connecting. Ron was Barney's "best friend out of the box." In the context of social media, Ron's hilarious glitch takes them on an action-packed journey where boy and robot embrace the beauty and chaos of real friendship.

New animated film from 20th Century Fox. The setting is in a near-future world where young people are armed with B-bots. These B-bots are said to be robots, but more similar to a mobile phone with more functions, mainly used for listening to songs, playing games and browsing social media. After all, the focal length of the film's perspective is on junior high school students, so it seems that no matter robots or mobile phones can only do these things. Moreover, the advertising slogan of B-bots is best friend out of box, so a half-height oval ball is indeed more friendly than a small brick in your hand. The functions are complete and there are many ways to play. If you want physical contact and you can hug it, I also want to make a whole B-bots.

But only the male protagonist, who is both poor and old-fashioned, did not buy him B-bots. Finally, at the beginning of the film, his father and grandma used unfair means to get a dropped robot from the transport worker. There is no code for all the functions that it should have. I don't know if it is artificial intelligence or a white spherical silicon-based creature. But just because it didn't act according to the pre-set "friendship code", everything about friends needs to be taught by the male protagonist, who dares to talk back with self-consciousness, but is more like a real friend than other normal robots. The interaction between the male protagonist and his robot ron is really loving.

The two of them were human beings who disliked the faulty robot at first, and then found that although the robot was somewhat artificially retarded, it was really good for him, and the two of them got along very happily. Because ron used too much force, he began to dislike him again, and he was disliked by ron in the opposite direction. I understand that friendship should be a double arrow. When the company came to destroy ron, I had to flee to the deep mountains and old forests without internet to protect him... In short, ron is really super warm. With the spirit of sacrifice like the protagonist of a heroic movie, he would rather drain all the batteries (and risk being destroyed when he returns to the city), but also move the starving male protagonist back to the city; he also pays attention to details and understands that the male protagonist is afraid It's dark, and you can't even turn off the lights when you sleep, and they will glow by themselves when the power goes out at home. See I also want a whole ron.

In "Heavenly Mind", although the plot kills forcibly quitting Internet addiction, robots are really cuter than humans.
If the normal B-bots are a high-end smartphone, then the special ron is equivalent to the artificial intelligence cultivated by the male protagonist from the bottom up. Just follow your word, and that's how friends are between people. As for the male protagonist, he may not be as warm as Ron, but he has the courage to run away from home for his robot friend. Moreover, the male protagonist, who has no friends in school and is afraid of being rejected, dares not take the initiative to invite others. Anyway, it has always resonated with me. So, when I see this kind of film, the idea will always eventually become not to be addicted to the Internet, and to communicate more with humans, such as "Ready Player One", which I personally don't like very much.

What if there is a warm robot in the society as a friend? Why even family carnival cartoons need BE, just because one of them is a robot? Apart from my personal views, objectively the second half of the film is a bit rushed, not as good as the first half, which makes me think it would be better to end it in the escape from the forest. In the feature film, Ron falls down without power, and there is a future talk about recharging and resurrecting, which is perfect. Well, the ending of ron, from a sci-fi point of view, is actually quite romantic. The body disappears, but his consciousness melts into the entire network. I even suspect that this setting refers to "Ghost in the Shell". The main thing is that the previous fault code can be transmitted by touch, and finally this friendship code needs to disappear on its own, just like forcibly opening up abuse, forcibly calling on everyone to quit Internet addiction.