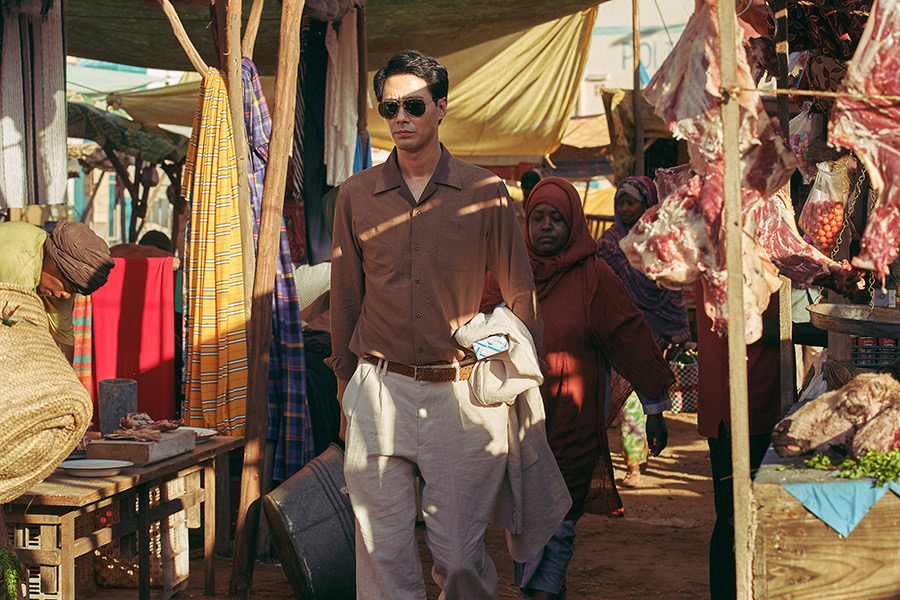 This film is a drama based on real historical events, focusing on the civil unrest in Somalia in 1991 and the emergency evacuation of the South Korean embassy and the North Korean embassy.

The story takes place in Mogadishu, the capital of Somalia. Hearing the name of Somalia, everyone's first reaction is the inexhaustible pirates and the endless wars. The film happened in the context of the civil unrest in Somalia in 1991. "Mogadishu" is also known as the Korean version of "Escape from Tehran". The theme of the story can be seen from the film's other title, "Escape from Mogadishu". A group of diplomats far from the country have to fend for themselves in this chaotic environment.

In the film, real historical figures have been pseudonymized.
South Korean ambassador Han Sun-sung and North Korean ambassador Lim Yong-soo both racked their brains to do their jobs well. The two sides have diametrically opposed positions, which naturally led to conflicts.
Just as diplomats from both sides were arguing, street gunfire disrupted everything. Rebels stormed the capital, ready to overthrow Barre's dictatorship.
As the fighting between government forces and rebels escalated, Mogadishu was plunged into chaos, and even the embassies of North Korea and South Korea were stormed and looted many times.
Diplomats from various countries are evacuating, and diplomats from the DPRK and South Korea are also looking for help everywhere, trying to find a way to evacuate. After being deceived and tricked many times, the two groups of people who were originally incompatible with each other decided to stick together to keep warm. Only in this way can there be a chance to survive in the turmoil.

A weak country has no diplomacy. This sentence applies everywhere.
Somalia is in chaos, North and South Korean diplomats have nowhere to live like ants on a hot pan, while the embassies of those traditionally powerful countries are in a state of flux. The machine gun on the top of the embassy clearly declared the sovereignty of the embassy. Somali government troops or rebels are wise to avoid it, and they don't dare to take a step forward.
The embassies of the DPRK and the ROK are like zero-dollar shopping malls, where robbers come whenever they want, and rob them as they want.
It is really difficult for these diplomats to have no national strength and want to increase their international influence.

The climax of the film's action scene is the scene where four cars escape. I just watched a lively scene here, which is far less moving than the emotional descriptions of the DPRK and ROK diplomats before and after.

The only and biggest highlight of the whole film is the ending, the scene where the two sides parted at the Kenyan airport.
They walked over and over again before the gate of hell, had a lifelong friendship, but were forced to play strangers when they parted. This scene is familiar in "The Secret Service" (Gongjak, 2018).
When a grain of sand of the times falls on an individual's head, it is a big mountain. The civil strife in Somalia, the confrontation between the DPRK and the ROK, and any trivial matter placed on an individual's head will cause a huge pressure that people can't breathe. And it is against this background that this group of diplomats who gave up their lives gave out a little gleam of their own humanity.
This light not only gave them hope in the plight, but also infected modern peninsula people.

The two groups of people have the same language, writing, and the same ethnic and cultural origin. They were originally brothers and a family, but now they have become mortal enemies of each other, fighting endlessly for different ideologies. After being forced to separate, the older generation naturally wants to return to the family, while the new generation will have less and less willingness to unite after receiving a completely different education.

"Mogadishu" expresses this indescribable grief, and tells everyone that the north and the south are one family through the experience of life and death at a critical moment.

A united escape from a turbulent region, a glimmer of humanity in the background of the times.