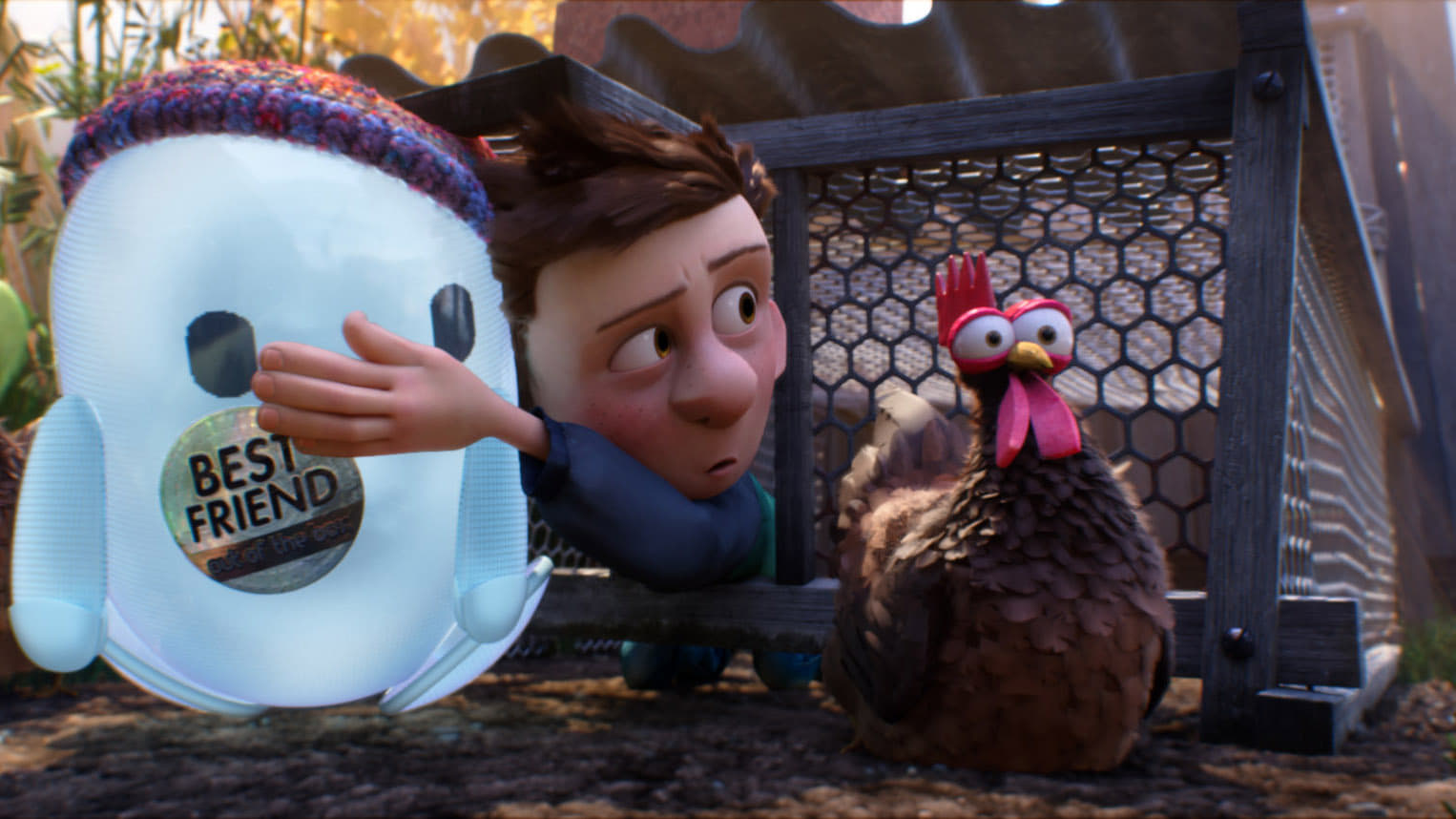 This "Heavenly Mind" is a sci-fi movie about childlike innocence. He advocates that we can put down our mobile phones and make friends with the people around us. This is a movie that adults also gave high marks. I hope everyone can watch it. , this out-of-control robot has its own mind, and it becomes friends with its owner. Let’s come and see the interesting and touching story of the robot Xiaobai and the little boy Lacy with the author!

First of all, because of the little boy's birthday, he also has an unqualified egg robot.

The city in the work has studied the egg robot. This egg robot is opened by the children themselves, so that they can have their own egg robot. This robot can take pictures and upload, and can give warnings and interact with the owner. It is welcomed by all children. This has greatly increased the sales of egg robots. Every child has his own egg robot. Only the little boy has not yet. He is very envious of others.

On his birthday, his father also gave him an egg robot, but his robot program is only 5% incomplete, which makes him out of control at all, the little boy wants to take it to school, but is on the way He was directly hit by a car, so he could only leave Xiaobai at home. When he got home, the house became a mess. His Xiaobai was fundamentally different from other robots. It had its own mind.

As can be seen from the above plot, because of the prevalence of egg robots, children basically have one, and they are liked by all children. The little boy Lacy also wants to have one, so when he is angry, his father also gives him one , but Xiaobai's program is not complete, so it has its own ideas. It can be said that because of the little boy's birthday, he also had an unqualified egg robot.

In the work, Xiaobai has an incomplete program, so there is no safety lock, so he secretly came to the boy's school, and he turned off the safety locks of all the robots. These robots can be broadcast live all over the world, so that his classmate, the little girl, can also He became an Internet celebrity, and his robot Xiaobai actually organized a band with a baby in it. Xiaobai got into trouble, and he called all the robots to come here.

These robots turned off the safety lock and started to operate casually. The children turned it into a big zombie, but the zombie ate the little girl, and fortunately pulled it out. This video was discovered by the egg robot company. Now, they immediately sent someone to catch Xiaobai, and the little boy ran away with Xiaobai desperately, because it and Xiaobai had become good friends of each other.

As can be seen from the above two clips, because Xiaobai has no safety lock, it actually turned off the safety locks of other robots. These egg robots have become uncontrolled without safety locks. With these children playing frantically, the parents who saw these were terrified, and Xiaobai was also ready to be forcibly recycled. It can be said that because of Xiaobai, all the robots are messed up.

Finally, because of the friendship between Xiaobai and the boy, they cherish each other.

Seeing that the little boy's condition was getting worse, Xiaobai forced himself to turn on the computer, and then carried the little boy forward, and was finally found by his friends, and it fell to the ground. , they are separated. But the little boy missed Xiaobai very much, so he found Xiaobai with the help of his parents and grandma. At this time, he found that these children were not happy, so Xiaobai decided to pass the data to them himself, but Xiaobai left, The boy gained a bunch of really good friends.

As can be seen from the above plot, it is because Xiaobai and the little boy are each other's best friends, so when they encounter danger to each other, both of them will be willing to risk their lives for each other, and Xiaobai is a particularly kind Robots are willing to sacrifice themselves in order to make children happy. It can be said that because of the relationship between Xiaobai and the little boy, they cherish each other.

All in all, in this robot storm, the least favored robot is indeed the most emotional robot.