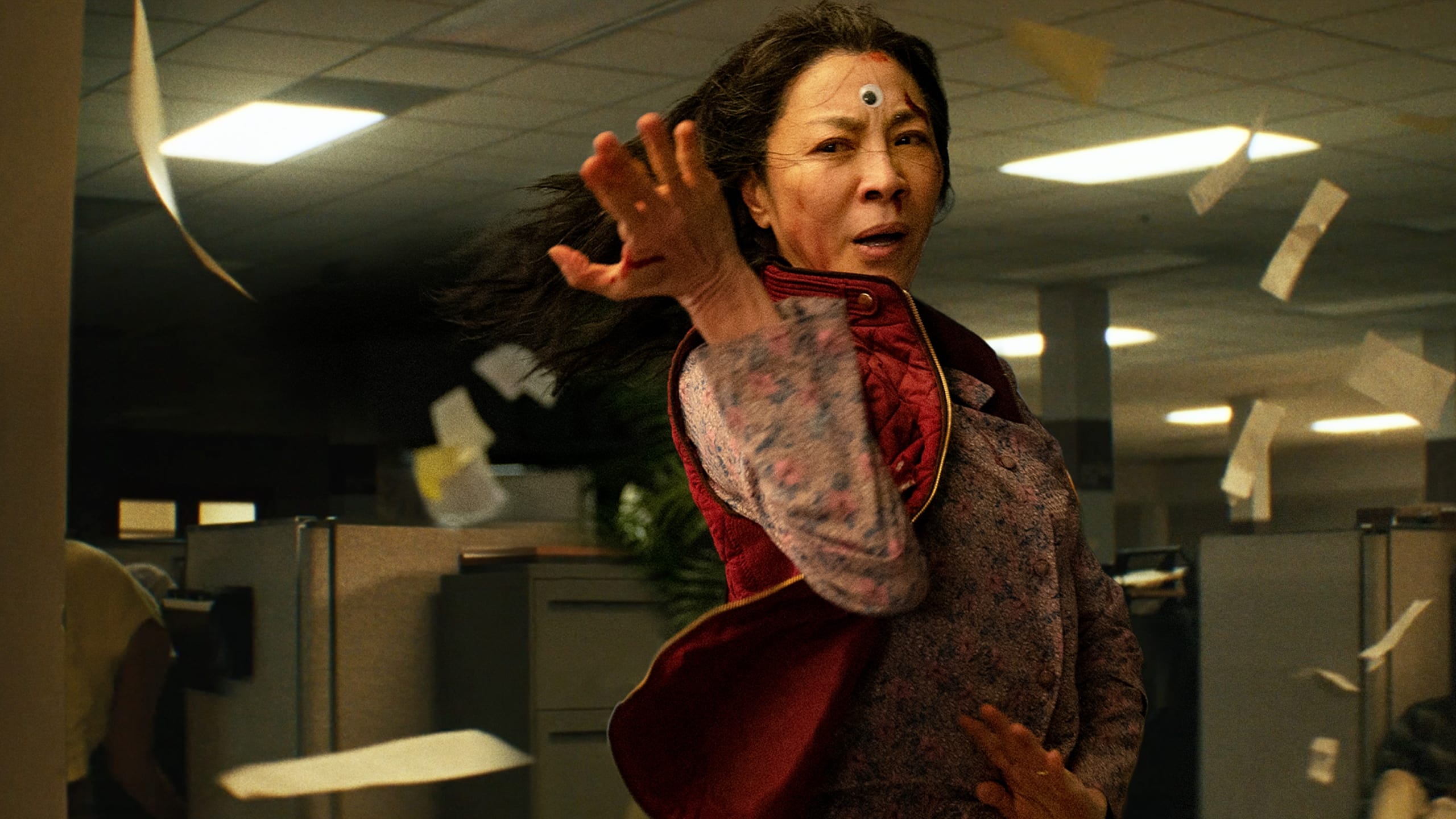 How can an Asian mum save all the world? Love is the only answer.
Evelyn, 55, is a Chinese-American immigrant woman who runs a failing laundromat. On the day of her father's birthday, while she is frazzled with planning a New Year's Eve party, dealing with a tax audit of her laundry and stopping her rebellious daughter from coming out of the closet, her husband Waymond suddenly seems to be a different person. This different Waymond tells Evelyn that there are multiverses in this world, but all of them are under attack by evil forces and only this Evelyn, who is the most ordinary Evelyn among all the universes, can save the world. Thus, Xulian begins to travel through the universe, trying to connect with herself in different universes to gain power, and eventually finds out that the evil force is actually the her daughter Joy in one of the universes! In order to save the world and to redeem her daughter, Evelyn begins to open up to Joy and try to reconcile with her……The fantastic special effects and hilarious plots add infinite imagination to the story of traditional Asian family conflicts. If you are looking for a story that will make you want to laugh, cry, and think about the realtionship between you and your parents, then this is it.
2. Doctor Strange in the Multiverse of Madness

The most thrilling Marvel movie!
A girl who can travel through multiverses has been chased by an unknown force and escapes to the universe where Dr. Strange is. To protect her, Dr. Strange goes to seek Wanda's help. What he doesn't expect is that Wanda is the real killer after this girl! It turns out that after the death of Vision, Wanda was so stimulated that she lost her mind and became the Scarlet Witch. Wanda wanted to obtain the power of this girl to travel through the multiverse to find the universe where she and Vision were happily married and had two kids. She believe this is the only way to help her reunite with her son. Dr. Strange has to fight the Scarlet Witch to protect this girl, and during this fight, they stumble into the Multiverse. In these universes, Wanda becomes the master of the universe and battles a bunch of superheroes, while Dr. Strange begins a showdown with the zombie version of himself……The director of this film Sam Raimi, who is known for his expertise in thrillers, shows a strong personal style in this film, with psychedelic special effects, blood all over the floor and rotting zombies that will make you scream.
3. Spider-Man: Into the Spider-Verse

A perfect blend of 2D and 3D, the best animated superheroes movie of recent years!
High school student Miles has been accidentally bitten by a radioactively contaminated spider and subsequently undergoes a strange physical transformation. Afterwards, this world's Spider-Man tragically dies in a battle, and Miles becomes his successor by accident. While Miles is struggling with how to become a competent Spider-Man, 5 Spider-Men from parallel universes have been transported to this universe. To help Miles and to return to their own universe, the five Spider-Men work together to battle the villainous Jinpin, trying to stop Jinpin from activating the Time Crashers that could destroy the entire city. In the process, Peter Parker, a mediocre and decadent scrappy Spider-Man in his own world, begins to train Miles on how to become a great Spider-Man in this world, which also redeeming Peter Parker himself from the failure life. This is a story is about growing up, friendship, betrayal, goodbyes, faith, redemption, and the search for self-worth.
4. Source code

One of the most iconic parallel universe movie!
The hero Colter wakes up in his sleep, and find himself on a train heading to Chicago with a beautiful woman, Christian, sitting in front of him. As he wonders, eight minutes later the train explodes and Colter wakes up in the same situation again. It turns out that Colt was a soldier who was injured in the line of duty and only his brain survived. He was implanted by the military with an eight-minute source code of a bombing victim's memories before the explosion. The military wanted Colter to find the bomber during the numerous eight-minute segments as a way to prevent the criminal from causing a bigger explosion. After Colter's efforts, he finally find the culprit and successfully stop the explosion. However, living in the source code caused Colter so much pain that he eventually chose to end his life. Was living in 8 minutes forever the only option for Colter? In a parallel universe, it seems there are other choice for him……
Loklok_app TwitterLoklok youtubeLoklok Fanpage facebookLoklok app InstagramLoklok app whatsappLoklok app telegram