Thriller movies are rarely watched, but workplace immersive dramas are staged every weekday. From the first episode, the setting is to think carefully and understand everything. Maybe the workplace itself is a thriller, but people can't see it in the game.

Desks, chairs, and rugs with color-patterns, systematically "trapped" the prey, one after another. 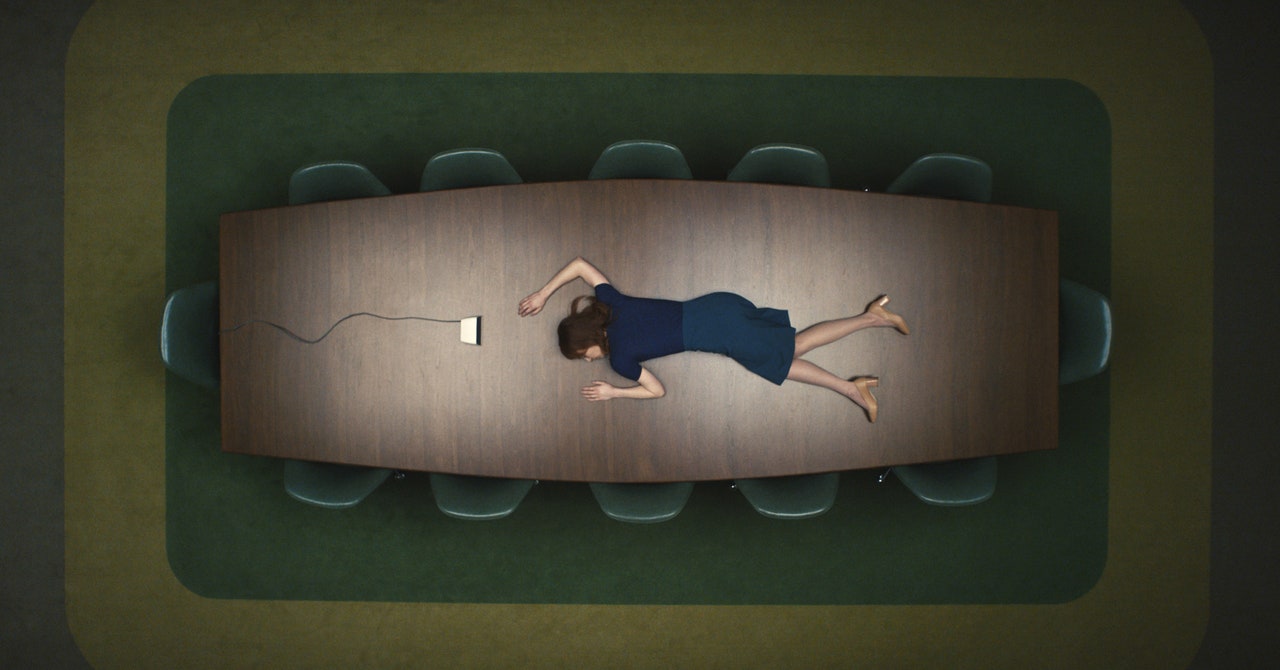 Main characters and plot
It starts with a female employee in a commuter outfit dizzy on a huge desk, and the overhead shot gives the audience a god-like perspective—oh, a plaything. But that's a person. Then she asked a series of questions after waking up.

Five questions, you can't leave the locked office from the outside without answering it.
It's a simple question that kindergarten children can answer. The female employee unconsciously smiled when she heard the first question, but the next second she panicked - she didn't know who she was. After answering the 5 questions, her fear grew stronger in her heart. She knew nothing about herself and the world she had lived in. She was just a flustered UNKNOWN ("unknown") machine. And the voice over the loudspeaker told her that she gave a perfect answer.

In modern people's life, work occupies the bulk of time and energy. From overtime work in the industrial age to today's 996 system, work is eroding people's lives more and more inexorably. In fact, every exciting work law reform or social news event only prompts the capital society to more covertly squeeze, and even siege the city on the cultural front.
When faced with the news of sudden death caused by overtime work, the group of workers who are also migrant workers have consciously produced some social Darwinism arguments that whitewash capital, which is especially chilling. Brothers of modern migrant workers who have been drained by their work can't even understand the truth that their lips are dead and their teeth are cold. They are just blindly immersed in fiddling with unknown so-called data, fighting for unknown so-called titles and endless climbing grids, living in one day. Sitting in the delusions of this system and then constantly being systematically devoured.
In such a story background, in such a big change in the future, as human beings, how do we know ourselves and how do we face ourselves? Where does the self-esteem of humans, different from those of livestock, come from? Work and people, which is the means and which is the end? Where do people's sense of worth and dignity come from? What are the basic elements that make up a person?
And from the topic of work-life balance, if we can completely separate work and life through technological means, will we really step into a better society? Scientific and technological progress has been rolled out in all fields. Is it a blessing or a curse to mankind? If man's will and memory are divided into two, is he entitled to a tyranny of himself (Outie) against himself (Workie)? Does man have the right to dispose of his consciousness, allowing half of his free will to be deprived and imprisoned?

In the film, these issues are also widely discussed in social scenes other than Lumon, on TV and in brochures.
It can be seen that Mark accepted the amnestics for the motive of escaping the pain, but it can also be seen that the salary conditions provided by Lumon are very good and even the housing is provided, but the newcomer Hurley’s question at the beginning is deafening - I am a livestock ? Is it sufficient to be a human being to have food, clothing, housing, and even manicures in suits and leather shoes? And with such a choice, are we really immune to pain? Are we safe from giving up free will, living in ignorance, and facing the world without understanding? There is also a hidden topic in Mark. Can suffering be ended, can it be understood? How do you save someone around you who is in pain? Also, what's behind the unopened loudspeaker behind the layer-by-layer system? Is it a human, or an algorithm without a body, or something else? Can we live in the world without understanding the world we live in?

Blindly guessing Hurley and Petty, as two variables, will push Mark to find the answers one by one. Perhaps the only thing that can overcome pain and nothingness is creation and breakthrough.